Home › Uncategorized › How to Talk with Your Teen about E-Cigarettes Parents are right to worry — the use of e-cigarettes and non-combustible tobacco products amongst teenagers is on the rise.

Emerging research shows that, although e-cigarettes may be an effective method of harm reduction for traditional smokers, e-cigarettes themselves are far from harmless. Electronic Nicotine Delivery Systems (ENDS) are a new frontier in smoking, and parents are smart to protect their teens from the scarcely publicized dark side of e-cigarettes.

With a variety of device shapes and vapor flavors, e-cigarettes are gaining popularity with minors in part because they may seem fun or tasty. In fact, according to the FDA, a study conducted between 2013-2014 found that “81 percent of current youth e-cigarette users cited the availability of appealing flavors as the primary reason for use.”

Many teens, however, don’t know the real cost of smokeless cigarettes. The following guide contextualizes the ENDS landscape and offers tips for starting a dialogue with your child about the risks of e-cigarettes.

The Regulation of Smokeless Cigarettes — or Lack Thereof

Shockingly, before May 2016, no federal laws existed to restrict e-cigarettes from use by minors. By 2014, more middle and high schoolers were smoking e-cigarettes than combustible cigarettes. Though all tobacco products are now regulated by the Center for Tobacco Products under the FDA, the appeal of noncombustible tobacco and nicotine have taken hold.

As of 2018, 3.62 million middle and high schoolers were using ENDS. In December of that year, the National Institute of Drug Abuse (NIDA) reported that these numbers have continued to climb — 20.9% of high school seniors had “vaped” nicotine (an activity so-named due to the creation of vapor that is inhaled in e-cigarettes) and 25.7% had vaped nicotine-free fluids within the last month.

Though they were designed to help combustible tobacco smokers wean off their cigarette dependencies, e-cigarettes have become a gateway to smoking for many who had no nicotine addiction in the first place, including teens. The ENDS industry has been widely criticized for marketing that could appear to appeal to youth.

It’s been well documented that Juul relied heavily on social media and young people with “influencer” status in their initial marketing strategy. To this end, the Stanford Research into the Impact of Tobacco Advertising observes that, “although the company professes it only targets ‘adult smokers,’ it is more than a bit ironic that JUUL has achieved cult like popularity among youth in part due to its launch campaign.” They analyzed in depth this 2015 campaign, pithily entitled “Vaporized” and carried out in vibrant colors. 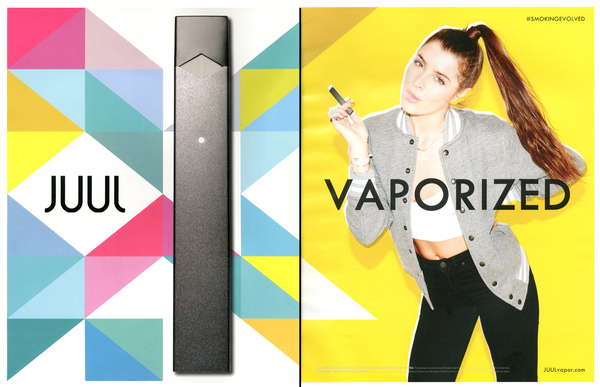 The Stanford researchers underscore that Juul’s early ads feature “casually dressed 20-year-old models being cool, smiling, joyously jumping, and kissing while vaping their JUUL.” They conclude that, “while the models were young adults, in many of the advertisements their activity was more typical of teenagers” and “clearly resonated with a younger demographic.”

Damaging Effects of E-Cigarettes on Teens

E-cigarettes are dangerous to youth for a variety of reasons, primarily:

We know that most teenagers seek out e-cigarettes for the flavoring, not the nicotine fix. However, whether they know it or not, teens using e-cigarettes expose themselves to an increased risk of nicotine addiction and all of the disadvantages nicotine dependency entails. 13.7% of teen e-cigarette users reported that they “don’t know” what’s in their device, but teen e-cigarette smokers are 22.6% more likely to start smoking combustible tobacco products in the next six months than their peers who don’t partake at all.

Once teens have encountered nicotine, it could predispose them to addiction and change the formation of their brain. The Centers for Disease Control and Prevention (CDC) explains that, not only is nicotine itself highly addictive, it might increase the possibility of addiction to other substances further down the line.

Neural development generally continues through the mid-twenties, and adolescents build synapses — the connection bonding brain cells as learning takes place and memory forms — more quickly than adults. The CDC warns that nicotine modifies this synapse construction and, in so doing, “can harm the parts of the brain that control attention, learning, mood, and impulse control.”

Combustion, then, is not the only element that makes cigarettes dangerous; there are other threats in the chemical profile of products containing any tobacco, period. Dr. Mark L. Rubinstein, a researcher who published his work on this topic in Pediatrics, weighs in that “teenagers need to be warned that the vapor produced by e-cigarettes is not harmless water vapor, but actually contains some of the same toxic chemicals found in smoke from traditional cigarettes.”

Rubinstein’s team tested the urine of teen e-cigarette users and found toxic compounds at a three times higher concentration than in their abstaining counterparts. They even detected chemicals like propylene glycol and glycerol, which can become carcinogenic when heated (as in a vaporizing ENDS device), in those who smoked nicotine-free e-liquids.

The bottom line is that e-cigarettes haven’t been around long enough for us to know how heavy usage will affect the body, and what they contain is somewhat mysterious. Manufacturers are not required to disclose all their ingredients, and packaging can be misleading — nicotine has been detected in some products sold as nicotine-free.

How to Talk to Your Teen about E-Cigarettes and Vaping

Though this conversation may be difficult, there are simple ways to begin talking openly with your teen about this health hazard. Approaches to keep in mind:

You’re not alone in the mission to protect your children from addictive substances. Kids’ Health is here to answer your questions about e-cigarettes and vaping, or to help your child stop vaping if they’ve already started. Schedule an appointment today to talk to a trusted medical professional about how to safeguard your children against the dangers of e-cigarettes.